Costco in New Orleans is Opening This Week. So much commercial activity surely will spurn Real Estate Prices

Economic Development around New Orleans is booming. Now is a great time to be in the New Orleans area. National companies continue to show faith in investing in NOLA. And as local real estate prices are dictating, home buyers are paying top dollar. 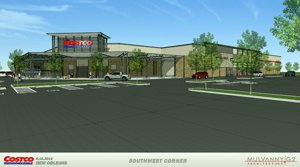 Costco is part of a string of “big-box” style retailers and chain stores that have either opened, are under construction or are planned for New Orleans.

Wal-Mart is building two stores in the city. A Whole Foods Market is nearing completion. And the new “Mid-City Market” development houses a Winn-Dixie. In the Algiers neighborhood next year, a Petco, a Ross clothing store and a Mattress Firm will open.

“Any of us who grew up here know that we have spent our lives going to Jefferson for a lot of our shopping,” Councilwoman Susan Guidry said. “It is very exciting to think of the people from the suburban parishes coming into New Orleans.”

All told, the major retail projects expected to be completed by the end of 2014 add up to 1.5 billion square-feet of new development, according to the New Orleans Business Alliance.

City officials believe those additions and others will pump long-lost sales tax revenue into New Orleans. Costco, some think, could also send a good number of suburban shoppers back into the city looking for deals, as it is the retailer’s first store in the region.

Sales tax collections in Jefferson Parish have long surpassed those in New Orleans.

Last year, for example, Jefferson generated $310.7 million in sales taxes, excluding taxes generated from the sale of food and drugs, automobiles and hotel and motel rooms in the parish. Orleans Parish brought in just $162.9 million, but that includes every category, meaning the gap between the two parishes is even greater.

Over the five-year period from 2008 to 2012, Jefferson’s haul was nearly double that of New Orleans in comparing the same two figures.

Big-box retailers and chains have historically set up shop on the outskirts of city centers, where large parcels of land are in long supply.

“What you saw in the last several decades was a trend in retail nationally to create investment in suburbs,” said Aimee Quirk, an adviser to Mayor Mitch Landrieu on economic development. “And so there wasn’t as much opportunity in the city core.”

According to a study commissioned by the New Orleans Business Alliance, New Orleans residents spent about $1.9 billion on retail goods outside of Orleans Parish in 2012.

The Business Alliance proposes that if city residents had access to more stores, they’d spend money closer to home.

“A lot of that has just been because those