Nationally known, high-end furniture retailer Arhaus will be the anchor tenant for a second building under construction at the South Market District development in the Central Business District, according to a release from development group The Domain Cos.

Arhaus, based in Cleveland, Ohio, will occupy a 15,500-square-foot space in The Park, a $21.3 million building under construction as part of the first phase of development at South Market District. The building will also feature a 10,000-square-foot CVS Pharmacy and a 1,500-square-foot location for local pet grooming and supply store Fetch.

The three companies are the first retail tenants to be announced as part of the $200 million mixed-use development of apartments, retail, restaurants and public parking space.

The location will be the first for Arhaus in Louisiana. The 30-year-old company has stores in more than 40 cities concentrated in the Midwest and Northeast, with a few locations in Atlanta, Houston, Palm Beach, Fla., and Denver.

The CVS store will be the first full-service pharmacy in the Warehouse District neighborhood. Locally-owned Fetch got its start in Mid-City on Toulouse Street.

In addition to the retail space, The Park building will include a 440-space public parking garage. The five-story building will be the first public garage in the city to offer electric 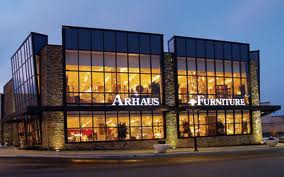 The building will feature an open rooftop for events and a 2,200-square-foot public plaza with landscaping and seating.

The Park sits on the corner of Girod Street and O’Keefe Avenue, directly across from the $48.4 million Paramount building also under construction as part of the South Market development. The Paramount includes 209 apartments and 22,000 square feet of retail space, consisting mostly of food and beverage tenants. Developers are expected to announce leases for that building in the coming weeks.

Both projects are expected to be complete by October. The buildings were designed by New Orleans architects Eskew+Dumez+Ripple.  Woodward Design+Build is the general contractor for the project.

According to the release, developers will start work on a third building, The Beacon, in the summer. That project, which will occupy a lot on Girod Street across from Paramount, will include an additional 114 apartments and 20,000 square feet of retail space.

The financing package for The Park building includes a $16 million construction loan from First NBC Bank and more than $2 million in New Markets Tax Credits.

The entire $200 million South Market project, which will ultimately include 700 new apartments and 170,000 square feet of retail, is taking advantage of a 12-year payment in lieu of taxes plan approved by the Industrial Development Board. The project is also benefiting from the Louisiana Enterprise Zone program for mixed-use, transit-oriented developments.