Louisiana Among the States with the Lowest Property Taxes

The 2016 American Community Survey data shows that New Jersey still leads the nation with the highest average annual real estate tax (RET) bill of $8,374—$7,707 more than RETs paid by Alabama’s homeowners. The difference between the highest-taxed state (New Jersey) and lowest (Alabama) grew by $481 in 2016.

The overall distribution remained roughly unchanged since 2015, as the composition of the top ten remained the same. The map below clearly illustrates that the highest property tax states are found in the Northeast while—with the exception of Texas—southern states boast the lowest RET bills for their resident homeowners. 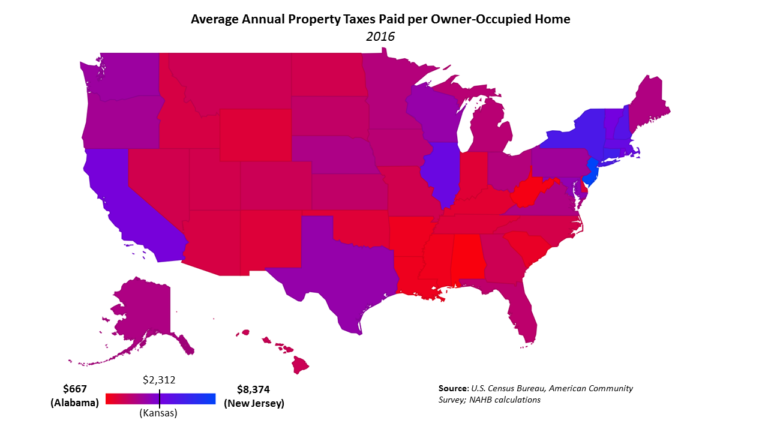 As property values vary widely by state, controlling for this variable produces a more instructive state-by-state comparison. In keeping with prior analyses, NAHB calculates this—the effective property tax rate as measured by taxes paid per $1,000 of home value—by dividing aggregate real estate taxes paid by the aggregate value of owner-occupied housing units within a state. As shown below, New Jersey has the dubious distinction of imposing the highest effective property tax rate—2.14% or $21.40 per $1,000 of home value. Hawaii levies the lowest effective rate in the nation—0.29%, or $2.94 per $1,000 of value. Although the state imposes a low rate, it ranks 28th in real estate taxes paid per homeowner as the average home value is the highest in the country ($676,571).

Property taxes account for 40% of state and local tax receipts, on average, but some state and local governments rely more heavily on property taxes as a source of revenue than others. Texas serves as an excellent example once again. Unlike most states, Texas does not impose a state income tax on its residents. Even though per capita government spending is tame compared with other states—11th lowestin the country—Texas and its localities must still find a way to fund government obligations. Local governments accomplish this by levying the 7th highest effective property tax rate (1.62%) in the country, on average. The state government partly makes up for foregone individual income tax revenue by imposing a tax on corporate revenue rather than income.

Of course, neither home values nor a state’s reliance on property tax revenue is fully responsible for the geographic variance of property tax rates and revenues. State spending per resident, the nature of this government spending, the prevalence of homeownership within a state, and demographics all affect tax policy and, thus, the type and magnitude of tax collections. These variables combine to explain the variance that the two factors discussed here do not fully capture.