The Times-Picayune Home values grew in Orleans Parish by 9 percent in 2010 but continued falling in all other parts of the metropolitan area last year as the suburban housing markets continue to languish, according to figures from the New Orleans Metropolitan Association of Realtors. For the metro area as a whole, home prices fell 4 percent.

Kim Williams and her dog, Bruce Lee, stand on the porch of her new home in Gentilly Terrace. Williams chose to move to New Orleans ‘because it’s got a lot of character, and it’s an exciting time for people who are doing public policy work.’

Orleans is the first parish to dig itself out since metro home prices began falling in 2008. It rebounded after a one-year citywide decline in home prices, as the city is benefiting from national trends of people wanting to live closer to where they work, optimism about the city’s future, attractive rebuilt housing stock and viable schools.

“Orleans Parish is bucking the national trend in an amazing way and continues to have rising prices,” said real estate expert Wade Ragas, who analyzed the home sales data. “There’s an enormous rise in consumer confidence in Orleans that believes that the city is headed toward being better run and with better schools and a better police department. There’s a lot of faith that a turnaround is happening.”

Other parishes suffered from anemic job growth, uncertainty surrounding the oil spill, and post-Hurricane Katrina shakeouts as people who bought houses at inflated prices after the storm were forced to sell at a loss.

Conditions in St. Bernard were the worst, with prices falling 13 percent because more homes were rebuilt after the storm than the market could sustain. Jefferson, the state’s second most populous parish, saw prices fall by 8 percent. Prices fell by 5 percent in St. Tammany Parish.

But there are signs of improvement: Across the eight parishes in NOMAR’s study, 640 more homes sold in 2010 than in 2009. The biggest share of those sales — 238 properties — were in hard-hit St. Tammany Parish.

“Maybe we’re getting close to a bottom, barring some economic disaster,” said Ragas, a professor emeritus of finance at University of New Orleans and president of the research firm Real Property Associates.

But Ragas said it’s unclear how these trends will hold up. He’s concerned that the economy may slow in the second half of the year, especially if oil and gas operations in the Gulf of Mexico don’t get back to normal after last year’s moratorium. The region also needs more job growth to support people and homes in the area.

“The biggest problem in the whole area is we don’t have major new employers coming in,” said Tom Giroir, owner of RE/MAX Real Estate Partners and this year’s president of NOMAR.

After a wacky year in 2010 with the oil spill disaster making the future seem unpredictable, the home-buyer tax credit distorting sales patterns, and lapses in the National Flood Insurance Program delaying sales, real estate professionals are hoping that 2011 is less eventful.

Margie Inman, a Realtor with Coldwell Banker/TEC, which has seven offices in the New Orleans area, said appraisals are currently the biggest problem.

Sales often get knocked out because homes won’t appraise for the amount that buyers and sellers have agreed upon, and if the home isn’t worth the asking price, the buyer can’t get a loan for the full amount. Foreclosures contribute to the problem because they drag down the value of comparable homes. That’s likely to continue to be a problem in 2011; foreclosures nationwide could pick up because properties are beginning to make their way through the system again after delays when it was discovered in October that banks weren’t taking the proper steps to seize homes.

“Think about these sellers, who’ve waited for years to sell their homes and the price is lower than what they wanted, and then it won’t appraise,” she said.

Lending continues to be a challenge, Realtors and lenders say. Minimum credit scores for loans have increased, potentially a big issue for Louisiana, which has the fourth lowest average credit score in the country at 674, according to the credit rating firm Experian. On the brighter side, private mortgage insurance, designed to protect lenders if borrowers don’t have a 20 percent down payment on conventional loans, has become easier to get. 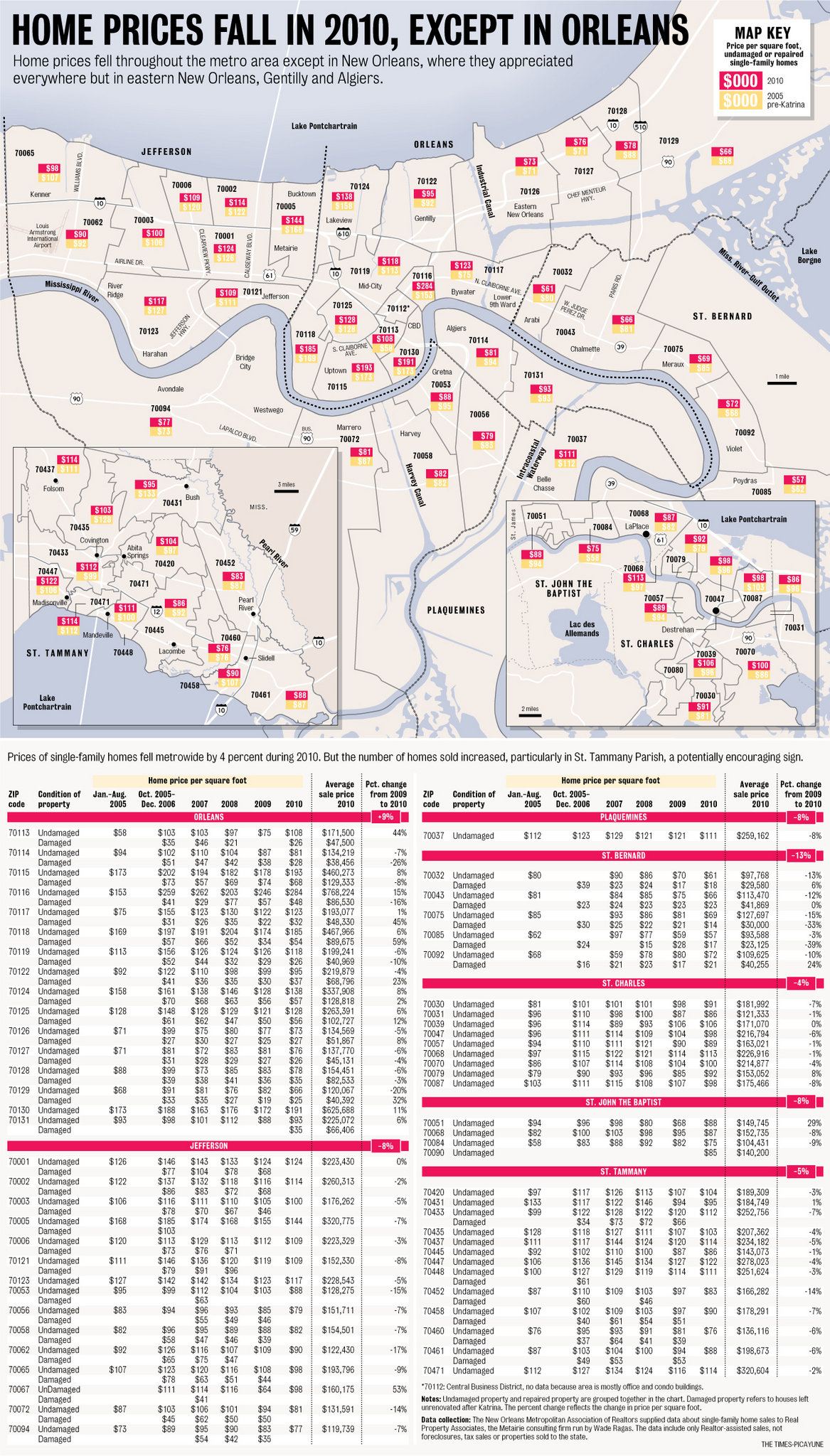 Agent Danielle Nice has built a business at Mirambell Realty by catering to recovery workers who have decided to stay. Nice, who returned to New Orleans following Katrina after two decades out of the state, said that her clients are well-educated people who fell in love with the city. They’re often looking for properties in walkable areas or with an attached rental, and they’re not afraid of transitional neighborhoods.

“A lot of them are young and doing fantastically well in their careers because they were given the opportunity to rebuild the city. They’re meeting their mates, they’re having babies, and they’re choosing New Orleans as their home,” Nice said.

One client is Kim Williams, who purchased a home in Gentilly Terrace in March using the home-buyer tax credit. Williams could have lived anywhere in Louisiana, Mississippi or Arkansas as part of her work with a nurse home-visitation program for first-time mothers. “I wanted to move to New Orleans because it’s a little bit bigger city and it’s got a lot of character, and it’s an exciting time for people who are doing public policy work.”

Williams shopped for about six months before finding a 62-year-old home that is 1,400 square feet and took on only 6 inches of water during Katrina. “I chose to come to Gentilly Terrance because it’s a little more affordable. You can get a little more house for your money. I think it’s poised for development because it’s close to the French Quarter and the Marigny and City Park,” she said. “I think it was a wise investment.”

Drue Banta, meanwhile, was in Washington, D.C., for three years after Katrina. Her current job doing coastal recovery work for the state also would have allowed her to live anywhere, but she wanted to be in New Orleans for the quality of life. Banta bought an 819-square-foot Victorian cottage near Audubon Park. She got in for “not a whole lot of money” and snagged the $8,000-tax credit.

“For me, and a lot of young people, you just want to be in the city and close to amenities,” she said. “In D.C., there’s not really that spirit of community or neighborhood.”

After three years of price declines in Jefferson Parish, Ragas said, homes are now at the most affordable prices since the early 1990s. Last year’s declines were worst on the West Bank, at about 7 percent, while declines in East Jefferson ranged from 2 percent to 7 percent.

St. Tammany continues to be a challenging market because homes there saw the biggest price inflation after Katrina, and are now suffering the biggest fall, sometimes leading to foreclosures for homeowners. And with such an active charter school movement in New Orleans, St. Tammany is no longer the obvious destination for families seeking better educational systems.

Prices have declined 16 percent in St. Tammany since 2007, Ragas said, but declines have been more moderate in western St. Tammany than the eastern portion of the parish, which was harder hit by Katrina and has suffered from job dislocation in eastern New Orleans.

Plaquemines Parish saw only a small number of homes sold in 2010, but prices declined 8 percent.

In St. John the Baptist Parish, prices also fell 8 percent, but the area will benefit from the Nucor steel plant and any job growth in the Hammond area.