The often forgotten, New Orleans Riverwalk, will undergo a much needed transformation and will soon be labeled as an The Outlet Collection at Riverwalk.  This prime real estate renovation will spurn the downtown area and will surely become a stop for our tourists and locals as well. 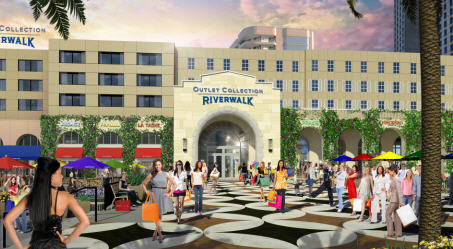 Owners of the Riverwalk Marketplace in downtown New Orleans said they will invest $70 million to redevelop the mall in an upscale outlet center to open in late 2013.

The Howard Hughes Corp. intends to expand the mall’s footprint by about 50,000 square feet to 250,000 and add national outlet stores to its tenant mix as well as local retail, dining and entertainment options. The company said its considering its options regarding the existing mall tenants who occupy 95 percent of the property.

Construction will begin later this year and the mall will reopen as The Outlet Collection at Riverwalk.

Mark Bulmash, senior vice president of development for The Howard Hughes Corp., said the property will be the first in the nation to place high-end outlet offerings in an urban center.

“It’s been a very intriguing concept to a lot of the tenants out there,” said Bulmash, adding that prospective tenants want to tap both the 8 million people that visit New Orleans annually and a proximate local population hungry for closer and more diverse retail options.

Howard Hughes Corp. did not name national tenants interested in the development but said in a statement that many of the tenants will be opening their first locations in Louisiana.

The redevelopment efforts will be the first at the mall since it was opened in 1986.

Mall traffic was driven by largely tourism after larger tenants such as Victoria’s Secret, Abercrombie & Fitch and Bath & Body Works left the outdated property after Hurricane Katrina. The mall’s tenant base has largely fallen to local tourist shops with the few remaining national tenants include Chico’s, Clarks and Gap.

General Growth Properties, the Riverwalk’s former owner, sold the mall to The Howard Hughes Corp., a spin-off company, in late 2010 as a part of a bankruptcy restructuring plan.

Pamela Hensel, a University of New Orleans marketing professor, said the mall will need to attract far more local shoppers than it has in the past, particularly to support the additional square footage called for in redevelopment plans.

Hensel said the national tenant mix developers are targeting and the upscale outlet model appear to be ways to differentiate the property from other retail centers close by.

But Hensel is unsure how viable the outlet shopping center model will be in downtown New Orleans.  Most retail outlets are located in suburban or even rural areas because retail space is cheaper, a factor that allows tenants to offer lower prices and operate on slimmer margins.

Riverwalk may be outdated, but it’s location on the riverfront is still prime – and pricey – real estate, she said.

“It’s still a bit of an unusual move,” Hensel said.