A group of neighbors in the Warehouse District is opposing the Historic District Landmarks Commission’s approval of the proposed Tracage Luxury Living apartment complex, putting the fate of the project once more in the hands of the New Orleans City Council.

The HDLC hearing was for the property design, which some residents insist does not fit with the surrounding neighborhood. The Traçage site, where Annunciation Street meets the Pontchartrain Expressway, will include 140 luxury rate apartments, 6,000 square feet of retail space on the ground floor and a 155-space parking garage on the lower floors of the structure. 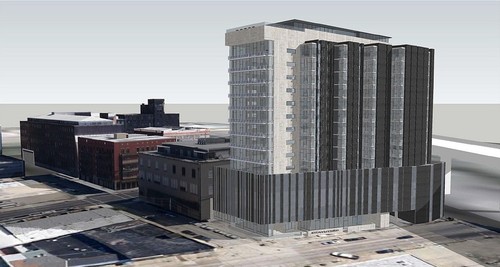 The Lengsfield Lofts Condominium Association, the Warehouse District Neighborhood Association and Lengsfield condo owners Russ Herman and Joshua Rubenstein announced over the weekend they are officially appealing the HDLC approval to the council.

The goal of the appeal is to send the project back to the HDLC “to freshen up the design to fit the neighborhood more,” said Troy Dupuis, Warehouse District Neighborhood Association president.

Neighbors who filed the appeal are concerned with the grey façade of the building. Their main concern, though, is the height of the building, which they say will dwarf surrounding properties.

Most buildings in the Warehouse District down to Lafayette Square are two to five stories, and their heights top out at 65 feet. The most recent version of Traçage is

planned for 184 feet and 16 stories. They also think its additional residents will create traffic problems.

This latest appeal is one of two options left to those opposing the project, Dupuis said. The City Council earlier this month voted 5-1 to extend an interim zoning ordinance to include the Traçage development. The City Planning Commission’s decision on the project, for which the hearing has yet to be scheduled, can be appealed as well, Dupuis said.

In an exclusive interview earlier this month, co-developer Anthony “TJ” Iarocci told CityBusiness that the development process for Tracage has been “awful.”

“A couple of these residents…they’ve cost us a lot of money and a lot of pain and a lot of time,” Iarocci said. “But we’re breaking ground this time. We’re not going to let them slow us down.”

Iarocci insists his project is necessary because the city needs more housing stock. He also noted that Traçage is 100 percent privately financed and has not sought tax credits or other incentives.

Traçage was first approved in 2005 with no height limit and originally planned for 489 feet. The original groundbreaking was set for 2007, with Spectrum Capital of Jackson, Miss., as the financier.

It was met with immediate resistance at the time from the same groups that filed the HDLC appeal late last week.

It started in 2005 as a $1.3 million land purchase by Tulane MBA students Iarocci and Robert Tatum and has turned into an eight-year, $5 million process of litigation, public relations battles and scrapped ideas.