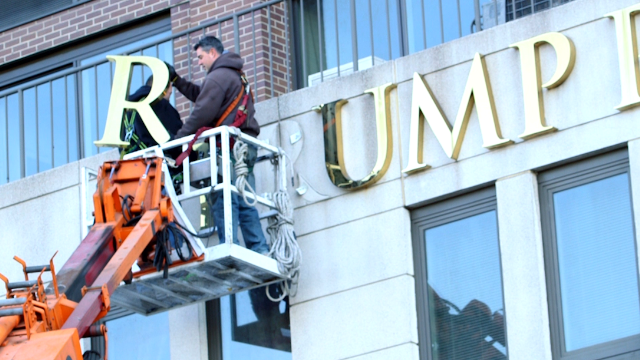 Equity Residential, which owns apartments across the country, sent an e-mail to residents that it would be renaming the towers a more neutral name that featured the building’s address (e.g. 180 Riverside Blvd.).

The buildings are currently named Trump Place. In the 1990s, Trump and a group of Hong Kong investors developed the three high-rises along the Hudson River. Despite the fact that the buildings were sold to Equity Residential in 2005, they still carried the Trump name.

The new names on the buildings “will appeal to all current and future residents,” according to Equity Residential’s e-mail to tenants. Marty McKenna, a first vice president of Equity Residential, elaborated to the Wall Street Journal: “We have been speaking to the Trump Organization for some time regarding the use of the name. We agreed to wait until after the election to avoid being involved in the political situation.”

In a statement, the Trump organization responded: “This recent change is simply the enforcement of a pre-existing agreement which has been in place for years. It was mutually agreed upon.”

Other see an added value in buildings that bear the president-elect’s name. Trump International Hotel and Tower in Chicago has seen its value rise since the win, according to Chezi Rafaeli, a real estate professional with Coldwell Banker Residential Brokerage. Rafaeli, who has sold more than 200 apartments in Chicago’s Trump Tower, says he has been fielding more international calls from interested buyers since Trump’s win.

“It’s a huge honor for them,” Rafaeli says. “Buyers from Russia, Asia, and Brazil have been calling me saying they are interested in Trump property. The property in my opinion will go up tremendously, especially if he does well in office.”