A Whole Foods Market at North Broad Street in Mid-City is set to open Tuesday with 35 new local vendors.

Most of Whole Foods’ local product sections include bakery and grocery products, but they also offer seafoods, specialty coffees and beers and soaps and shampoos.

The 25,500 -square-foot store at 300 North Broad St. will anchor a 60,000-square-foot development called the ReFresh Project.  It also includes a café and commercial kitchen known as Liberty’s Kitchen and The Goldring Center for Culinary Medicine at Tulane University, which will teach healthy cooking methods to residents, students and doctors.

The Whole Foods store is expected to create about 125 jobs.

As part of its corporate effort to encourage local food production, Whole Foods is asking regional producers to apply for low-interest loans through a national program called Local Producer Loan Program, which has a budget of $25 million.

The only Louisiana food producer to receive a loan since the program began in 2007 is Matt Ranatza Farms of Belle Chasse. Ranatza received a $100,000 loan for a new packing shed to help the company more efficiently wash its fruits and vegetables.

provided 184 loans to 155 companies, according to a news release from the company. 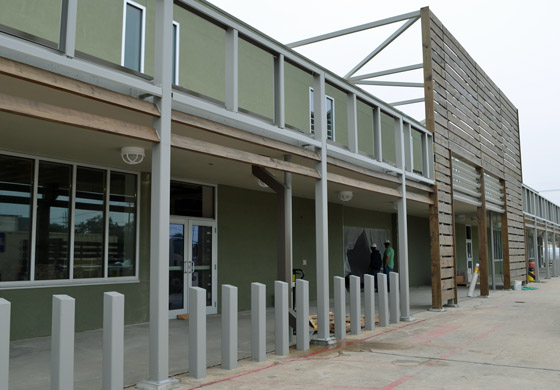 “We would love to give additional loans in New Orleans and Louisiana as a whole, and are excited to continue the work there,” she said by email.

To receive a LPLP loan, producers must meet Whole Foods quality standards, use the funds for expansion and have a business plan. The loans range from $1,000 to $100,000 and have fixed interest rates that average at 5.2 percent. To learn more about the loan and apply, visit www.wholefoodsmarket.com/loans.

The new store is centered among New Orleans neighborhoods that include Mid-City, Treme, Faubourg St. John and Lafitte, where per capita income levels are lower than Uptown and Metairie.

But that doesn’t mean shoppers will notice lower prices at the Broad Street location.

Whole Foods regional officials offered a statement today that said, “We structure our pricing and product mix based on the market and neighborhood surrounding each of our stores.”

But spokesperson Kristina Bradford later said there won’t be any pricing adjustments at the new store.

It was originally scheduled to open December 16, but project managers working on the construction said they needed more time to have the store ready.

The ReFresh development will also include the central office for FirstLine Schools, the offices of Broad Community Connections and the Crescent City Community Land Trust.

It is a reuse of the former Schwegmann Bros. grocery store, which has been vacant since Hurricane Katrina. ReFresh was financed from several sources, including New Market Tax Credits, Goldman Sachs, Chase, The City of New Orleans, NORA, Foundation for Louisiana, La Raza, and Newman’s Own Foundation.